Twitter is a mashup – combining past and present – history and technology – cultures and places – and most importantly – people.

Kindred Spirits about Role of the Internet

Through Twitter, I have been able to do many things from finding tips about web design and graphics to pursuing political, environmental and social issues to posting links about our clients and about this area so that people all over the word can see them.  However, perhaps the most interesting Twitter  experience was a personal one. Tweeting led me to Peg Mullligan, a lady in New England, who is also interested in blogging, in distance learning, and practical uses of the Internet.  Because of our mutual admiration of Lucy Maud Montgomery’s Anne of Green Gables, we realized that we were kindred spirits in the way we envisioned the role of the Internet. 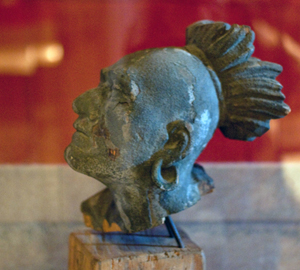 Serendipitously, my son travelled to Plymouth, Massachusetts earlier this fall, through Cupids 400, to research and photograph a little known fact in the history of John Guy’s Cupers Cove Colony.  Squanto (aka Squantum), a Native American, who had been born and grew up in Patuxet (which stood where Plymouth now stands), lived in Cupers Cove (Cupids) in 1617 -1618.  He went back to his homeland in 1619, and was there to greet the Pilgrim Fathers when they arrived in 1620.

Though his knowledge of English, he was of great assistance to them. William Bradford, Governor of the Plymouth said of him:

…Squanto continued with them and was their interpreter and was a special instrument sent of God for their good beyond their expectation. He directed them how to set their corn, where to take fish, and to procure other commodities, and was also their pilot to bring them to unknown places for their profit, and never left them till he died.

Squanto (Squantum) is little known as a person. He is usually portrayed as a Disneyesque caricature with the Pilgrim Fathers at Thanksgiving.  Yet, his life story is one of the most compelling in history.  He endured unimaginable hardships and personal suffering, and he was of great assistance to the Pilgram Fathers, helping them to survive in the New World.  I completed Internet research about him earlier and have included it in a website.

Just as a little side comment, the caption on the bust of Squanto in the Pilgrim Hall Museum in Plymouth, explains that Squanto’s head is the only remaining piece from a grouping of  figures representing the Pilgrim Fathers’ arrival in the New World that stood at the entrance to the Museum in the early 1900s.  That seemed so appropriate!  Squanto is still the ultimate survivor.

While in Plymouth, my son met Peg and her family who spent the Columbus Day Holiday in the area.  Then Peg invited my son to write a guest blog for her blog series: .

Technical and Marketing Communication: Content for a Convergent World: “Live with Abundance ”

As I said, though Twitter and our mutual interest in history, we have been able to combine history, culture, and learning in an interesting way.  I hope others will join in our experience through commenting on the topic of Squanto and early New World settlement, which is of great interest to us in this area due to the 400th Anniversary of Cupids, the first English Colony in Canada, in 2010 [References about Cupids 400 –  Cupids 400 Website,  The Cupids Archaeological Dig, Crossroads for Cultures – an Educational Site about Cupids 400 ], but also on the value of the Internet and Twitter as a cultural and a learning experience.